I will always be grateful to Chris Eccleston for introducing me to the wonder that is Doctor Who. He opened my eyes to a fantastic world of aliens and time travel and ordinary people doing extraordinary things. Nothing can take that away or make that any less important. But after Nine absorbed the Time Vortex from Rose’s mind via a kiss that the fandom had been waiting almost all season, we were introduced to David Tennant. Probably my favourite actor of all time. And, yes, that includes Johnny Depp and Benedict Cumberbatch before you ask. I fell in love with him as he saved the world from the Sycorax, grew back his hand, and toppled the British government within his first few hours of regenerating. And all of this while in his pyjamas. Brilliant. Absolutely brilliant.

David Tennant has one of the most expressive faces I have ever seen on an actor. When he smiles, it lights up the galaxies. But when he frowns, or yells, or looks just the slightest bit disappointed, the universe quivers in fear. And quite rightly so; he looks terrifying. Even with that gorgeous brown hair and his Converse with his suits. Hell, he even looked terrifying in his pyjamas. How’s that for brilliant acting? But what truly cinched David Tennant in my heart as my favourite Doctor (and actor) was his performance in “Tooth and Claw”, Season 2 Episode 2. Ten and Rose accidentally land in Scotland in 1879 and the first thing that happens as they leave the TARDIS is stumbling upon Queen Victoria and her armed guard. So, to solidify their cover story, Ten starts speaking in a Scottish accent. Which, as it happens, is Tennant’s actual accent. So what, I hear you saying. I’ll tell you so what: in the course of this episode Rose, Ten, Queen Victoria, Sir Robert MacLeish, and the inhabitants of the Torchwood Estate are set upon by a werewolf. Well, that’s the simplest explanation for what it was, anyway. So, in the midst of the excitement, Ten “loses” his Scottish accent and starts using his “usual” voice. And I didn’t notice until Queen Victoria did. So, what Tennant managed to achieve was making his put-on accent seem so realistic that he can even “slip” back into it, just as someone would lose their fake accent in times of duress. All hail, David Tennant.

I fangirled so hard after this episode that I found everything David Tennant has ever been in and went on a downloading spree. Casanova, Hamlet, Secret Smile, Fright Night, The Decoy Bride, Learners, and a bunch of other things. Let me just say that if you love Tennant as much as me, you need to watch him play Casanova.

But, as much as I would love to go on and on about Tennant, I am actually trying to review the fourth book on my fourteen step journey: Beautiful Chaos. It took me a lot longer than it should have to realise that this book shares its name with the third book in the Beautiful Creatures series by Kami Garcia and Margaret Stohl. Well worth a read, in my opinion.

Anyway, Beautiful Chaos is written by the very talented Gary Russell and centres around Ten and Donna, just after the Sontarans try to turn Earth into a Sontaran cloning factory. Russell expertly weaves extraterrestrial happenings with the heart-wrenching happenings of the Noble family. We enter Earth on the one year anniversary of Donna’s father’s death and, like that wasn’t enough, we learn that Wilf Mott (Donna’s granddad) has a lady friend with Stage Two Alzheimer’s. And it damn well breaks your heart. Because Netty Goodhart is such a beautiful person, and Wilf clearly loves her so much, and Sylvia (Donna’s mum) and Donna can both see how much Netty means to Wilf, that it is horrible to know that she will one day be lost to them. The Doctor wants to help and can’t because he knows there is no cure.  And when the Doctor can’t help the good ones, you know there’s absolutely no chance.

But Russell does this extraordinary thing where he makes it so Netty is the one who saves the day. The Doctor’s brilliant plan hinged on the misfiring synapses of Netty’s brain. And I loved it. It was like Russell was sending a message: Alzheimer’s is a horrible, horrible disease, but those suffering from it are still able to accomplish wonderful things.

I really do hate ruining plots, even just a little. So I’m not giving anymore away, except to say this:
Delphi at the Oracle in 21st century Britain.
Now run along and find this book. Allons-y!

What Russell managed to do in Beautiful Chaos was to tie in other episodes in a way that felt natural to me. In Roberts’ novel, the mentions of past Nine and Rose adventures felt contrived. But when Russell did it, I felt as though that is what Ten would have actually been thinking about in that moment. And you know what else? It was a River Song reference. For someone living in a post-“The Name of the Doctor”, and therefore post-River world, this was absolutely incredible. So much so that I had to document this event for all to see: 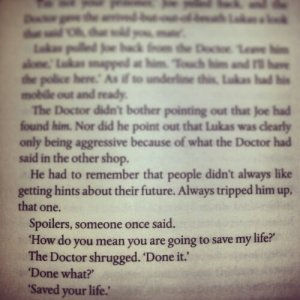 “Spoilers, someone once said.”
Welcome back, Professor Song.

There is a failing with fan fiction, and that is to cram in all the author’s considerable knowledge of the show/book/movie into the characters’ thought patterns, even if those thoughts make very little sense. Whenever I read these in fan fiction, I always repress a shudder. Instead of showing knowledge of character, it shows ignorance as the author is relying on established events to “show” the character, rather than through creating their own believable scenarios. Russell doesn’t succumb to this. He rises above it.

I also feel as though Russell captured the essence of Donna beautifully. This episode begins and ends with Wilf looking up at the sky for the TARDIS. After Donna had her memory wiped. We read a letter that Donna wrote pre-“The End of Time”, which didn’t arrive until after the Doctor drops her off back home, after she saves the world. Wibbly-wobbly-timey-wimey. We see her at her most sensitive and at her sassiest. But unfortunately Russell, I just have one bone to pick with you. Or with your editor.

It isn’t until the very end of the novel that Donna calls the Doctor “spaceman”. Which I loved…the first time I read it. But then she goes on to say it a few more times in the space of a page or two. It felt as though Russell remembered that “spaceman” is Donna’s preferred nickname for the Doctor, and jammed it in. Once would have been fine for me, Russell. The other few times just showed me that you underestimate Donna’s creativity with condescending pet names. And no one should ever underestimate Donna Noble.

Before I ramble for too much longer, I just want to have my say about Donna. After Rose, she is my favourite companion. Because she has no romantic designs on the Doctor. Never did. They were always just mates. She was a calming influence on him from the get go. No only calming, but stabilising. And she managed to temper his pride. All of this without the sappy doe eyes. I’m not saying Rose went all sappy on us, because she almost tore the universe into tiny, jagged pieces looking for the Doctor. She was the Doctor’s equal, but definitely not in the same way as Donna.

Well, let’s put it this way: Rose met the Doctor and left Mickey for him, essentially. Donna met the Doctor and managed to fall in love with another bloke (Silence in the Library/Forest of the Dead). For Rose, the Doctor became her life. For Donna, the Doctor changed her life. Rose’s life changed too, but I think you can see what I’m trying to say. It’s why the end of Donna’s story arc was so sad. Because Donna Noble was “the most important woman in the whole of creation” and she can never, ever remember.

Factoring in the complexity of the storyline, the perfect embodiment of the characters, and the mishap at the end of the book, I give Beautiful Chaos:

Postscript: as a bonus for you Whovians who have not yet branched out into the completely rewarding world of Doctor Who literature, here is just a little peak into how the novels help demonstrate the complexity of the Doctor: 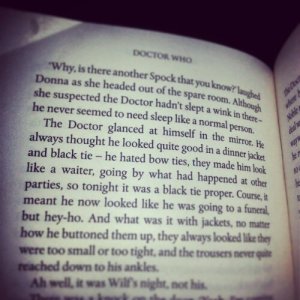 Bec Graham, 24, was born on the wrong continent. Everything from her burns-like-paper skin tone to her inability to cope with the slightest hint of a hot day suggests she should have been born under the gloomy skies and mild sun of the UK. She hopes writing will get her to her rightful home one day. Failing that, she scans the skies for a spinning blue police box, hoping to catch a lift back to the motherland.
View all posts by Bec Graham →
This entry was posted in Extorting Bibliophilia, My Fangirl Life and tagged Beautiful Chaos, David Tennant, Doctor Who, fan fiction, Gary Russell, Whovian. Bookmark the permalink.