“Choose Your Own Autobiography” by Neil Patrick Harris

As a rule, I don’t read non-fiction. I usually descend into an existential crisis about how much more any given person has achieved in their lives than I have. So, in order to prevent that, I stick to stories about fictional heroes who only managed to achieve more than me due to the presence of magic or futuristic technology or being thrust into situations that are so unrealistic that I don’t feel bad for not being as brave as that particular hero/heroine.
But Neil Patrick Harris’ autobiography was different. It’s still definitely about someone who has achieved way more than I could ever hope to (now, now, that’s just realistic, not everyone is an N.P.H. Otherwise the world just wouldn’t function), but the reason this one was different was, surprise surprise, because of its structure. How can a true story end up being a Choose-Your-Own-Adventure story? Aren’t the events fairly set in stone? Of course, I had to know the answer. So I finally gave in and bought the damn book. 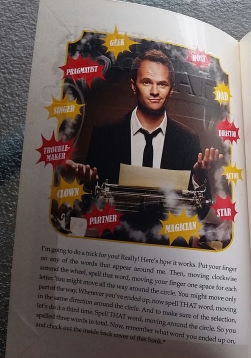 The postmodernism of this book literally begins on the inside cover.

N.P.H.’s autobiography may be the single most post-modern book I have ever read. I mean, who messes with their own timeline (besides Time Lords, of course)? What actually ends up happening is that you can either follow N.P.H.’s actual life or follow some of his alternate paths, which always wind up with you dying. As is usually the case in all of the Choose-Your-Own-Adventure books that I have read. What I loved about the majority of the alternate endings was that N.P.H. uses repetition. He sets up each scene the same way, having similar language throughout, but changing the details to suit whichever ending you have chosen. It is very clever. And very well done.

Just one of the awesome illustrations in this book. I chose this one because it goes with the alternate ending to N.P.H.’s life that involves Joss Whedon

This is not simply an autobiography, though. Besides the story itself, there are recipes for drinks and food, painstakingly described magic tricks, faux magazine articles, a cryptic crossword, illustrations, letters from famous friends (and one legen-wait for it-dary fictional character), pages that can only be found by absent-mindedly flicking through the book (as in, no instructions lead to those pages), and a page in which N.P.H.’s partner David Burtka writes all over the typeset prose. This book is a postmodern miracle.

As for the content itself, this book is highly addictive. I’m talking, “I’m only going to read a few chapters (read: pathways dictated by the book) before bed” turning into “wait, it’s past midnight already?! Where did the past two hours go?”. Harris has a narrative voice that is equal parts genius and hilarious. The entire thing is set in the second person. Well, obviously, since it’s a choose-your-own-adventure. But imagine writing about your own memories with the pronoun “you” instead of “I”. This never once feels contrived.
And oh man, Harris can turn a phrase. The entire book is written with a simple elegance. Genius doesn’t always need to be complicated. Plus, Harris is funny. Freakin’ hilarious.
All of these things, plus a million more things, add up to why this book is awesome.

I can’t really talk about the plot, because it’s someone’s life story. But I’ll give you a few highlights, just to really cement in the fact that you definitely need to read this book:

There. Now you are required to find this book and buy it. Because that was only a taste of the crazy antics that go on in N.P.H.’s autobiography.

Bec Graham, 24, was born on the wrong continent. Everything from her burns-like-paper skin tone to her inability to cope with the slightest hint of a hot day suggests she should have been born under the gloomy skies and mild sun of the UK. She hopes writing will get her to her rightful home one day. Failing that, she scans the skies for a spinning blue police box, hoping to catch a lift back to the motherland.
View all posts by Bec Graham →
This entry was posted in Extorting Bibliophilia and tagged actor, autobiography, choose-your-own, Neil Patrick Harris, non-fiction, postmodern. Bookmark the permalink.

1 Response to “Choose Your Own Autobiography” by Neil Patrick Harris