“The Shadow of the Wind” by Carlos Ruiz Zafon 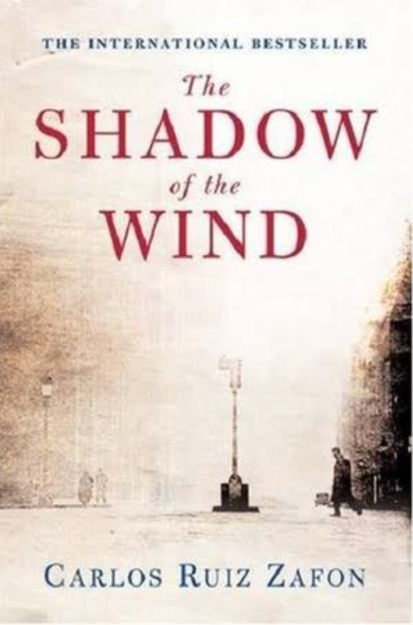 There is nothing more disappointing to me than hating a book recommended to me by a loved one. I want to open the book and love it just as much as they did, so that we can share in the experience. Loving the same book as someone is unique, and when it doesn’t happen there’s a sense of almost shame on my part.

That being said, I hated this book. I hated it so much I didn’t finish it. I made it almost 200 pages and then gave up. My rule is that as soon as I think the words “I don’t want to read” about any book, I give it away. There are too many amazing books out there to trudge through one that you aren’t getting into.

Now, I want to stress the point that I did not finish this book. Apparently the ending “fixes” all of the problems I had with this book. But if an author has to rely on the ending of a book to save it, there’s a serious problem. So all of my impressions of this book are of the first 200 pages.

The premise of this book is wonderful. A boy is taken to the Cemetery of Forgotten Books by his father and is allowed to pick one of them to take care of for the rest of his life (the idea that you “take care of books” is a beautiful one). This boy, Daniel Sempere, chooses The Shadow of the Wind by a man named Julian Carax. He reads the book in one night, loves it, and decides to find more books by this man. Only Carax seems to be an enigma. Nothing is known about his life after a certain date and his books are slowly disappearing.
Enter Lain Coubert, a mysterious man with a burned face who asks Daniel for his copy of The Shadow of the Wind so that he, Coubert, can destroy it. This is probably a good place to point out that Lain Coubert is a fake name that the man actually took from Carax’s book. In Carax’s story, the Devil is given the name Lain Coubert. And so, it is at this point that Carax’s story starts to bleed into Daniel’s life.

This sounds awesome, does it not? Like, this sounds like an awesome storyline. And maybe it would have been…if it had been handled differently.

Beyond being taken to the Cemetery of Forgotten Books, nothing actually happens to Daniel Sempere. Things happen around him. In fact, I have the sneaking suspicion that this book would be exactly the same without this particular character. Daniel does absolutely nothing for himself. Instead of trying to find clues about Carax on his own, by doing things like research, hunting around for clues, or that wonderful narrative thing of being in the right place at the right time, Daniel asks people about Carax and they tell him everything. That is all. Seriously. Daniel may be the laziest protagonist that I have ever met. What kind of main character lets other characters make the journey of discovery for them? Ugh, it pisses me off. Without the other characters, this story is nothing. And that is a problem.

There were two distinct instances when I started truly loathing this book. The first was when a beloved community figure in The Shadow of the Wind (Zafon, not Carax), is nearly beaten to death. Now, in any other book (in any other good book), Daniel would have witnessed the beating. He would have seen it and had a reaction to it and maybe done something about it. Or at least done something. But, instead, Daniel is TOLD ABOUT THE BEATING BY ANOTHER CHARACTER. ANOTHER CHARACTER WHO DOESN’T SHOW UP AGAIN. There was absolutely NO REASON why Daniel couldn’t have been there. He was quite literally doing nothing when he was told. Why couldn’t Zafon have had Daniel happen upon this atrocity himself? Not only would this have moved the story along and provided some character development, but it would have provided an immediacy to the story that is sorely lacking. In fact, Daniel never even visits the victim. All updates about this poor man’s health come from Daniel’s friend.

The second instance was when we were introduced to Daniel’s best friend’s sister, Bea. Now, a few chapters before she is introduced, we are told that Daniel not only dislikes her but that he is scared of her. So I naturally thought that either the relationship would sour further, creating tension; or that Bea would do something wonderful, like save Daniel’s life or his father’s life, and then slowly become the love interest.
This does not happen. Quite literally, Daniel sees a beautiful girl in a tight dress from behind. She turns around and it’s Bea. AND THEN HE FALLS IN LOVE WITH HER. That is not even an exaggeration. That is literally what happens. Daniel changes his mind about this woman’s personality because he likes the way she looks in a revealing dress. I mean COME ON. Give me something more than that. Like, a lot more.

After this point, I stuck it out for a few more chapters, but I had to give up. Nothing was happening and all of the information I was getting was coming from secondhand sources in the story. I have so many other books to read that staying with this one seemed pointlessly frustrating. Like trying to understand why people give a damn about the Kardashians.

I give this book:

And that’s purely for the premise.

Bec Graham, 24, was born on the wrong continent. Everything from her burns-like-paper skin tone to her inability to cope with the slightest hint of a hot day suggests she should have been born under the gloomy skies and mild sun of the UK. She hopes writing will get her to her rightful home one day. Failing that, she scans the skies for a spinning blue police box, hoping to catch a lift back to the motherland.
View all posts by Bec Graham →
This entry was posted in Extorting Bibliophilia and tagged Bea, Carlos Ruiz Zafon, Daniel Sempere, DNF, Julian Carax, The Shadow of the Wind. Bookmark the permalink.