“Me and Earl and the Dying Girl” by Jesse Andrews 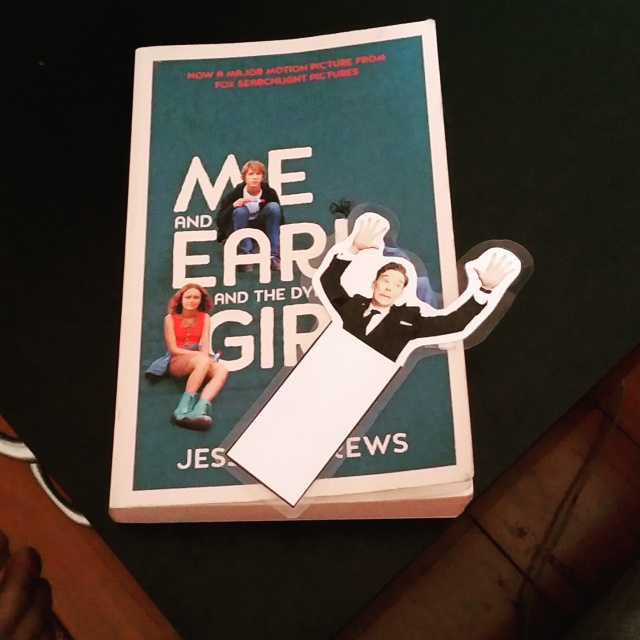 I’m going to jump right in: I’m not entirely sure what the point of this book was. After finishing it, I didn’t feel any different. No new revelations, no emotional ramifications. All I felt was a desperate need to see the movie because Nick Offerman is in it. But that is all.

Now, fans of the book may tell me that this was the point. That death is pointless and nothing changes and life keeps going around and around until the next death, but we live with this knowledge every day. Whenever we turn on the news, there are at least half a dozen tragic deaths that serve no purpose. I feel like art is supposed to have more meaning than this and maybe that’s why I didn’t love this book. I lead with this so that you know where I’m coming from before you decide whether you want to take my opinion on board.

Furthering my “lack of point” argument, I felt like nothing actually happened in this book. A senior, Greg Gaines, in high school finds out that an acquaintance, Rachel, has been diagnosed with leukaemia and is forced to hang out with her by his mother. The two strike up some kind of friendship, Greg and his other friend Earl make films that they only show to Rachel. Only, Greg’s mum finds the movie, shows it to the school and then “Greg’s life is over”. And that’s all.

No, I didn’t call spoiler. The book is called “Me and Earl and the Dying Girl”. If Rachel didn’t die, the title would make no sense. Worse, it would be a lie.
This is all that happens. There’s no character development, no major plot points. Just…a girl is diagnosed with leukaemia and dies. Quiet as you like. I needed more twists and turns from the plot. This book is a straight line from beginning to end. And, really, is there anything more boring?

BUT, according to Andrews, the movie is fleshed out a bit more.

There was also very little characterisation in this book. I felt like the only fleshed out character was our POV character, Greg Gaines. Everyone else felt very two-dimensional. And Rachel? It felt like she was only written as a catalyst. She was nothing but her disease. Everyone reacted to her leukaemia but not really to Rachel as a person. Earl makes a speech about Rachel’s strength of character and as I read the speech, all I could think was “Rachel isn’t any of these things. She’s a humanoid blob lying in a bed”. I felt nothing when Rachel died because Rachel wasn’t a character. She was a cardboard cutout. And does anyone really cry over cardboard?
Again, according to Andrews, Rachel becomes more of a person in the movie. But why couldn’t she be a person in the book too?

I did enjoy the way the story was told, though. Greg is writing to someone. We find out who that someone is, but not until the very end of the book. And having Greg tell his story this way means that he could play with form. Nothing about the way this book is written is traditional. There are bullet points and paragraphs with emboldened headings and scattered dialogue and lists and other nice touches that make this book incredibly easy to read. I loved the structure. I just wish I loved the actual story as much as I loved how it was told.

But my favourite part? Andrews added pages of the movie screenplay to the end of the book and added his notes to them, showing the reader what was different and explaining certain parts of the script jargon to people unfamiliar with scripts.
This was amazing to me. Andrews explained why changes were made for the movie and thus eased the minds of the readers who may have been attached to the book It was a completely unnecessary touch that showed Andrews’ audience how much he loves them.

Bottom line: Me and Earl and the Dying Girl is a sub-par story told beautifully with only one decent character within the whole cast. It is easy to read, but pointless. I give this book.

Bec Graham, 24, was born on the wrong continent. Everything from her burns-like-paper skin tone to her inability to cope with the slightest hint of a hot day suggests she should have been born under the gloomy skies and mild sun of the UK. She hopes writing will get her to her rightful home one day. Failing that, she scans the skies for a spinning blue police box, hoping to catch a lift back to the motherland.
View all posts by Bec Graham →
This entry was posted in Extorting Bibliophilia and tagged cancer, death, Greg Gaines, High school, Jesse Andrews, leukaemia, Me and Earl and the Dying Girl, Rachel, screenplay, script, structure, YA. Bookmark the permalink.