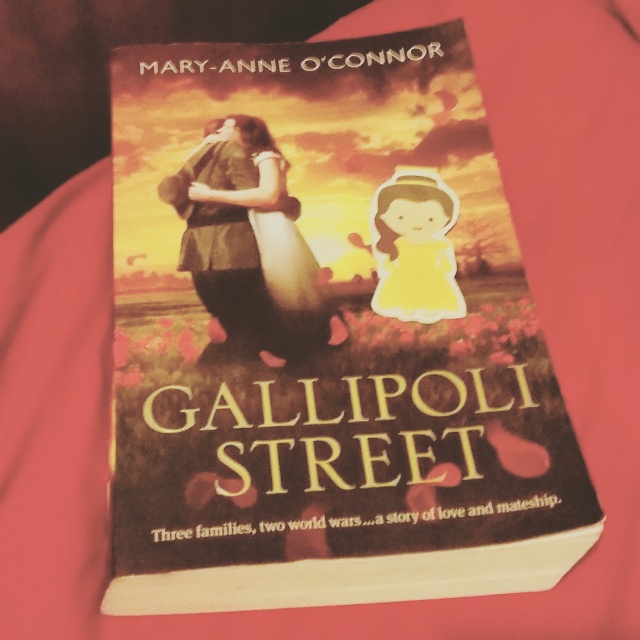 I had grave reservations about this book for the first few chapters. Not only because the last book my mum lent me was a dud, but because I was halfway through the first chapter when I noticed a particularly harrowing emblem emblazoned on one of the cover pages:

I avoid Harlequin like the plague. I hate romance as a genre. The entire story can’t be focussed on getting the girl/boy. Even in modern romance the storyline hasn’t progressed much further. It’s usually just getting the boy/girl and the job. Or something atrocious like that. So seeing that logo, coupled with the fact that I was smack bang in the middle of a romantic cliche (guess what? Love triangle. Girl in love with childhood friend. Some gorgeous floozy comes along and turns the childhood friend’s head. And then *gasp* scandal, the gorgeous floozy betrays the childhood friend, leaving the first girl clear to go after the childhood friend). I was so disappointed. The blurb sounded so promising! But I kept at it, wanting to see how the Great War would effect these relationships. Because, by this point, the war hadn’t started. It was being mentioned, foreshadowed if you will. And this scared me as well. I was thinking that I would have to deal with the whinging characters left behind and the men would come back from war and then that would be it.

O’Connor is actually a genius. She opens with the typical romance schtick and then completely messes with it. This woman takes what we expect of a romance novel and then turns it on its head. In the same way the Great War did for thousands upon thousands of veteran families. We get that horrifically predictable romance storyline (I really do loathe romance), and then see how the War changes everything. I think I just said the same thing three times, but this may be the best way to show just how much the War changed everything in this story.

Our floozy? Her name is Rose and she goes off to war as a nurse to escape her abusive husband, taking her daughter with her. Of course, Rose’s daughter doesn’t go to war with her, she just goes to France.
Our childhood friend? His name is Jack and he comes home from war with intense PTSD and almost fucks up his entire family.
Our girl in love? Veronica, and we see her get the love of her life back and try to cope with the way the war has changed him.

The story suddenly sparkles with life and it is magnificent. The shallow characters of Part One develop, and keep developing right through the story. I just…I was in awe. And I couldn’t put the book down. This is historical fictional its finest: with characters who bring the past to life. And what’s more life-like than love?

This story then goes beyond when our soldiers and nurses come home from WW1 into the second generation of these families. We see the veterans sending their children off to WW2. And because we already went through WW1 with the parents, we can feel the parents’ pain. More so than if these were two separate stories. O’Connor, I think, wanted to show us the immediacy of WW2 after WW1. The country only barely recovers, goes through the Depression, and then is sent to war again. O’Connor drives this point home beautifully. I cannot stress how impressed I was by this plot and its execution.

What was even more impressive were the love stories. Nothing repeated itself in the second generation. I mean, one son is in love with his childhood friend but instead of there being a love triangle, his childhood friend sends him a letter containing a wedding proposal. And one daughter falls in love with another son in the traditional digger-falls-in-love-with-his-nurse way, but it all gets screwed up when they come home and then there’s a period where these two are apart and then we get the happy ending (not a spoiler. This book is still a romance).
There was no staleness to any of the relationships. In fact, it is the relationships that make this book sparkle. Not only the romantic ones, but the friendships and the family connections. The three families in this book all grew up on the same street. A street which is renamed Gallipoli Street after WW1, seeing as so many of the children were involved in  that war. Every single relationship is multi-faceted and rich in colour. So every death, be it of a main character or a character who simply passes through, hurts. And that is a feat. Not every author can make us care about the death of lesser characters. But O’Connor does.

I’m rambling now. But essentially, I want to leave you with one thing: since this is the 100 year anniversary of WW1, and the 100 year anniversary of the ANZACs landing in Gallipoli happened jut last month, this is the perfect book for you to read. It has the historical stuff, but it also has the characters that can make you really see and feel what happened all those years ago.
For my non-Australian followers, if you have ever heard the word ANZAC in relation to Australia and have no idea what the hell is being spoken about, read this book. You get a pretty accurate depiction of the ANZAC legend. And why you all see us a certain way out in the big wide world.

I give Gallipoli Street:

“They shall grow not old, as we that are left grow old;
Age shall not weary them, nor the years condemn.
At the going down of the sun and in the morning
We will remember them.”

– An excerpt of The Ode, a poem recited at most Australian ceremonies of remembrance.

Bec Graham, 24, was born on the wrong continent. Everything from her burns-like-paper skin tone to her inability to cope with the slightest hint of a hot day suggests she should have been born under the gloomy skies and mild sun of the UK. She hopes writing will get her to her rightful home one day. Failing that, she scans the skies for a spinning blue police box, hoping to catch a lift back to the motherland.
View all posts by Bec Graham →
This entry was posted in Extorting Bibliophilia and tagged ANZAC, Australian, characters, family, fiction, Gallipoli Street, Harlequin, historical, Mary-Anne O'Connor, relationships, romance, The Great War, war, World War 1, World War 2, WW1, WW2. Bookmark the permalink.