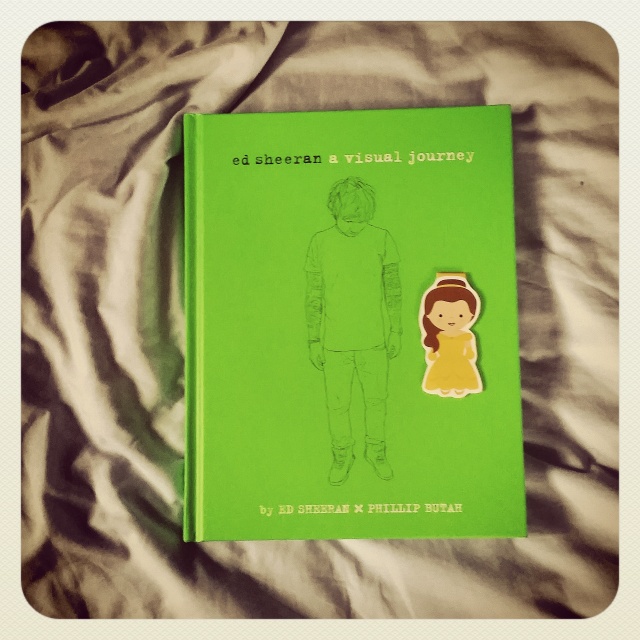 I can’t face my resume. I can’t bring myself to edit it, knowing that the last time I remade my resume it took me three hours. And so I will pretend that it doesn’t exist so that I can do something more pleasant, like reliving Ed Sheeran: A Visual Journey. I bought it the day after the Ed Sheeran concert. I had it finished by 12.30 the next morning. Ed Sheeran has always intrigued me, not only as an artist, but as an individual. So it was illuminating to read about Sheeran’s life from his own hand.

As a rule, I steer clear from autobiographies. They depress me. These people have lived extraordinary lives and I’m still living for the future. Not in a hopeful kind of way, but in a holding pattern kind of way. Everything I do is for some magical time where I have finally finished studying and can do the things I want to do. So reading about people who have done extraordinary things while I’m still waiting for my chance makes me a little blue.
The reason I picked up this particular autobiography is because it’s about Ed Sheeran and because it’s filled with beautiful pieces of artwork by Phillip Butah, a Sheeran family friend. This was a unique look at a man’s life and so I thought I should hang up my prejudices in order to experience it.

I’m not going to lie, this book is written very simply. For a man who comes up with complicated metaphors and exquisite similes, the prose in A Visual Journey was unadorned. However, I think this worked on many levels. For one thing, it felt as though Sheeran was talking to me personally, given the book’s conversational tone. For another, I felt this simplicity spoke to Sheeran’s humility. He could have been all airy fairy and pretentious with this book, but he wasn’t. He spoke about his life as if he were chatting to mates, and I feel like this is a genius move on behalf of Sheeran’s editor. If he had one (this is not a backhanded way of saying that the book was poorly edited. It’s me wondering whether Sheeran had an editor at all, given that he’s so famous).

I want to speak more about Sheeran’s humility. Sure, you could argue that his humble voice had been put on. But there’s so much of it evident, and with such ease, that I find it hard to believe it’s all fake. A man who puts so much soul into his music wouldn’t lie to his fans. Or, that’s what I choose to believe anyway. My favourite quote was this one:

The way that I live, the way that I am, the way that I spend my money, the things I can do … it’s a totally different life now. I don’t think money has changed the type of person I am. It’s not so much a financial divide. But it is partly the comfort of not having to worry about buying a train ticket to Jake’s tomorrow. When I went out for breakfast this morning, I didn’t worry about the bill when I paid. It can’t have been much, but it’s a reminder of how things have changed.

Obviously, this isn’t the whole story. Obviously Sheeran can buy things and do things that we mere mortals can only dream about. But he tactfully decided to not speak about them. Instead, he basically highlighted my dream: to be able to buy things and not worry about the price tag. If I can go out for dinner or buy a dress or a book or anything, really, and not worry about whether that means I’ll be able to go out with my friends on the weekend, I’ll know that I am financially secure. And I felt like Sheeran understood this.
Although the above was my favourite quote, the quote that best demonstrated Sheeran’s humility came just after Sheeran was deciding on which label to sign himself to. His choices were between signing to labels offering ridiculous sums of money (think $100,000), but who had turned him down before, or signing to a label who offered less money (think $20,000), but who had never turned him before:

I took the hit and accepted the $20,000. Having something in the bank already meant that I didn’t have to worry about money. I didn’t have to go for the blank cheque. I took all the EPs off iTunes and paid my parents’ mortgage, so that was my funding gone, but then I signed a publishing deal and everything started to go well.

Sheeran buried the fact that he used his only financial security to pay his parents’ debts in a sentence where he was explaining why signing the Atlantic was a good move. He could’ve made a big deal of it, but instead he threw that fact into a paragraph where the enormity of what he did for his parents was lost.

This book doesn’t have chapters, rather sections. Each section goes for only a few pages before Sheeran moves onto the next one. These sections are chronological, but not really joined together. I think the chronology is what makes the book flow so easily, coupled with Sheeran’s voice. Because I think if anyone else had written this, it would feel disjointed.

I can’t properly review this book, because I’m biased. I love Ed Sheeran, and I love his music. I believe that Ed Sheeran’s attitude to music is what all artists’ attitudes toward music is. So what I will say is that if you like art and art fascinated to learn more about Ed Sheeran, you will love this book. If not, maybe you should steer clear. 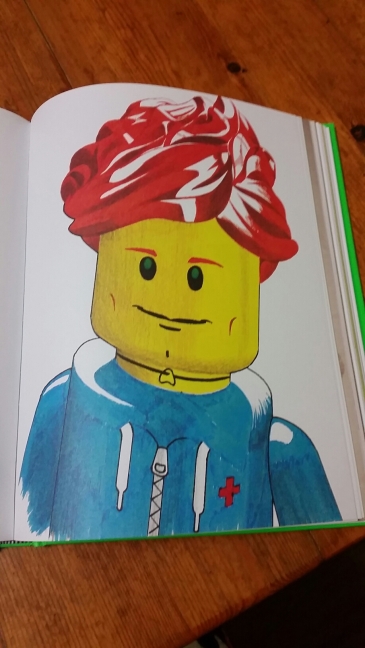 An example of Butah’s artwork. This is Ed Sheeran as a Lego man. Get it?

Bec Graham, 24, was born on the wrong continent. Everything from her burns-like-paper skin tone to her inability to cope with the slightest hint of a hot day suggests she should have been born under the gloomy skies and mild sun of the UK. She hopes writing will get her to her rightful home one day. Failing that, she scans the skies for a spinning blue police box, hoping to catch a lift back to the motherland.
View all posts by Bec Graham →
This entry was posted in Extorting Bibliophilia, My Fangirl Life and tagged art, autobiography, Ed Sheeran, humility, music, Phillip Butah, structure, voice. Bookmark the permalink.

2 Responses to “Ed Sheeran: A Visual Journey” by Ed Sheeran and Phillip Butah