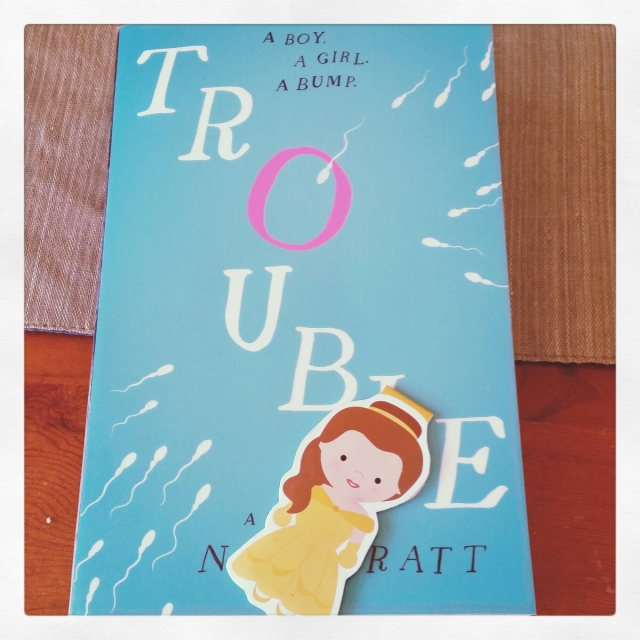 The last book on teen pregnancy I read was nothing but a cautionary tale about the worst things that can happen if teenagers have sex. In all honesty, I was surprised the book didn’t come with a pack of condoms and an already filled in prescription for The Pill. And then the second book in the series was all about how having a baby as a teenager will ruin your life. Not in as many words, you understand, but that was the vibe I got. Why did I read the second book? Because I have a pathological need to finish things. Anyway, remember this guy:

Yeah, that’s essentially what those books were. This guy, on repeat, for three hundred pages. I feel like the government put the author up to writing the series to deal with the “teen pregnancy issue” in a “young hip way”. Which didn’t work. At all.

Then along comes Trouble, a few years later, and is nothing like what I was expecting. I was originally turned onto the book by the wonderful Becky over at Blogs-of-a-Bookaholic. A five star rating by a blogger I trust? Bring. It. On.

Don’t get me wrong, Trouble definitely shows teen pregnancy in a negative light. It’s not like Non Pratt is advocating it as a life choice or anything, but instead of focusing solely on the trouble Hannah Sheppard, one of our protagonists, gets herself into, Non Pratt focuses on relationships. In fact, a lot of the time I felt as though Hannah’s pregnancy was simply a catalyst so that Pratt could talk about the varying types of relationships that exist in a high school setting. This isn’t in any way a bad thing, or a critique, I just felt it was refreshing.

What was new, and what I loved, was that Hannah never apologised for who she was. She liked boys and she liked sex. She didn’t go into a downward spiral of shame because she slept with boys. She was kicking herself repeatedly for that one time she forgot the condom. Because, as we all know, it only takes once to get pregnant. Sex was dealt with in a frank manner that I love to see. I’m of the opinion that sex is a primal instinct and making someone’s “first time” such a big deal is just a remnant of the oppressive times back in the day where sex was something one only did for procreation and if sex was enjoyed, then that was a sin. If everyone’s being safe, and if everything’s consensual, then what, exactly, is the big deal?

Anyway, I’m getting sidetracked. Pratt made teen sex normal. And even though Hannah is underage, Pratt made sure that the reader understood that Hannah was safe 99% of the time.

I’m not sure if I got my point across, or if I just made sense, but in a lot of YA that I read as a teenager, sex was this huge deal that protagonists spent a lot of time dwelling on. Yes, wait til you’re ready, but after that, so what?

We got the feeling, at the end of the book, that Hannah would be OK. That Aaron was getting there. This is a hopeful book, despite the subject matter. Bad things happen, terrible things, but our characters prevail. We see their strength and are sure that they will be OK. And, most importantly, that they have a solid support network of friends and family.

Basically, Hannah is Lorelai Gilmore. Only she’s British and she swears a little more.

Bec Graham, 24, was born on the wrong continent. Everything from her burns-like-paper skin tone to her inability to cope with the slightest hint of a hot day suggests she should have been born under the gloomy skies and mild sun of the UK. She hopes writing will get her to her rightful home one day. Failing that, she scans the skies for a spinning blue police box, hoping to catch a lift back to the motherland.
View all posts by Bec Graham →
This entry was posted in Extorting Bibliophilia and tagged Aaron Tyler, British, family, friendship, High school, high school Hannah Sheppard, Lorelai Gilmore, Non Pratt, relationships, teen pregnancy, Trouble, YA. Bookmark the permalink.