#33 “Murder in Mississippi” by John Safran 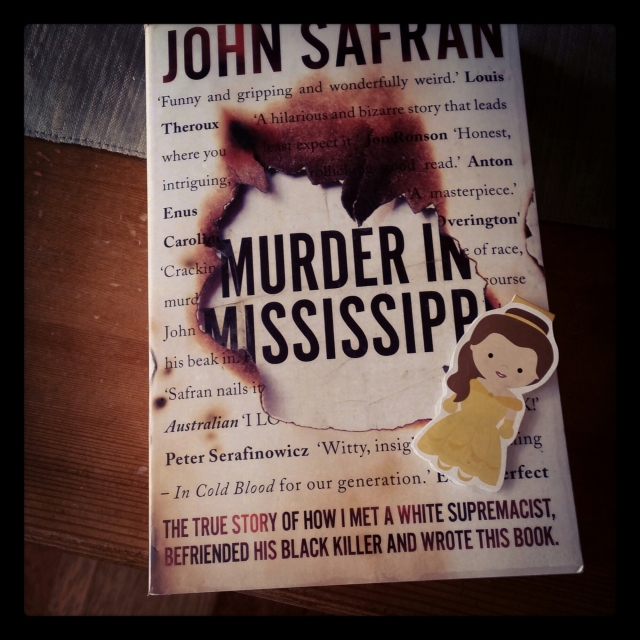 I don’t really understand true crime as a genre. I don’t understand the rules. Because there always seem to be these weird rules about how things work and what can be said. I’ve read In Cold Blood by Truman Capote and I loved it. But a lot of the dialogue was repeated verbatim throughout the novel. And I don’t really understand why that was. And the same was for Murder in Mississippi. Someone please explain to me why this happens? Is it so the author doesn’t get sued for misrepresentation? Is it for some weird legal thing regarding whichever case on which the author is reporting? Because from what I understand about memoir or non-fiction, art is supposed to imitate life. Art is life with a shinier edge and therefore, dialogue gets cleaned up a little. If there are a lot of pauses in what someone said in reality, those get taken out in the book version of that particular conversation. And if someone has an annoying verbal tic, that gets repeated twenty-five times in a conversation, that gets edited out too. Or at least dramatically cut down.

This was an actual excerpt of a conversation on Murder in Mississippi:

This was something the murderer of this story, Vincent McGee, told our author. Why did we get that? Why didn’t Safran edit? Why didn’t his editor edit? We could understand McGee’s character without all of those “you know what I’m sayin'”s. I found myself getting frustrated in very single scene Vincent was in. If it wasn’t too many “you know what I’m sayin'”, it was too many “you hear?”s.

Editing was a bigger problem in this book. There were slips and spelling mistakes littered sporadically throughout the story. But the worst slip-up of all was at the beginning of Chapter 12, “The Ring”. Safran is trying to get some more information about McGee to further understand him, McGee, as a person. So Safran talks to McGee’s sister, Vicky. But halfway through the conversation Safran slips up and says that Tina McGee, Vincent’s mother, is doing the talking. The editor was so not with it. And editors can make or break a book, really.

You’ll notice that I haven’t mentioned the “murder” part of Murder in Mississippi. This is simply because it’s too frustrating to mention. Richard Barrett, a white supremacist, was murdered by Vincent McGee. Barrett was stabbed in the neck so many times that McGee almost decapitated him. Safran spends the entire book trying to find a motivation for this murder but he never finds a definitive answer. Was it race, sex, power? We don’t get an answer! I hate getting to the end of a book and feeling like I wasted my time. That I didn’t learn anything. Especially because I spent 368 pages learning about modern day racism and prejudice and horrific racial opinions that are still held in this day and age. And at the end we don’t learn why McGee killed Barrett. We do find out that McGee has some kind of mental illness that includes hearing voices and seeing things (I’m pretty sure that’s some type of schizophrenia or schizoaffective thing). But that’s it. Safran never makes his point. And that, to me, is unforgivable.

However, the structure of this book is excellent. Safran wrote in scenes. We have chapters, but those chapters are broken into sections such as “The Clarion-Ledger”, “Maybe half an hour later” and “the mailbox”. I thought that was so clever. And, not only this, some parts are written in the present tense and others are written in past tense. This got confusing a few times, but the sections in present tense added an immediacy that made you feel as though you were standing right next to Safran. And that is kind of amazing.

He does touch on the corruption of the Mississippi legal and penal systems. That was enlightening and terrifying. How can race even be an issue anymore? I don’t understand. This is 2014! Safran makes you see just how deep-rooted racism is in the Deep South, and therefore in some parts of the world, and it scares me to death. Safran does this well, I’ll give him that. He even manages to break the tension, somehow, with humour. Never inappropriately, but it is still kind of amazing that Safran had me giggling in a book such as this.

Murder in Mississippi has some excellent turns of phrase and an outstanding story structure but is let down by a pointless story and those weird rules of true crime that mean that the author has to copy down what a person says exactly, no matter how repetitive and frustrating what that person says may be.

Bec Graham, 24, was born on the wrong continent. Everything from her burns-like-paper skin tone to her inability to cope with the slightest hint of a hot day suggests she should have been born under the gloomy skies and mild sun of the UK. She hopes writing will get her to her rightful home one day. Failing that, she scans the skies for a spinning blue police box, hoping to catch a lift back to the motherland.
View all posts by Bec Graham →
This entry was posted in Extorting Bibliophilia and tagged Australia, Deep South, John Safran, Ku Klux Klan, Mississippi, murder, Murder in Mississippi, power, race, racism, Richard Barrett, sex, true crime, Truman Capote, Vincent McGee. Bookmark the permalink.

3 Responses to #33 “Murder in Mississippi” by John Safran