#24 “The Messenger” by Markus Zusak 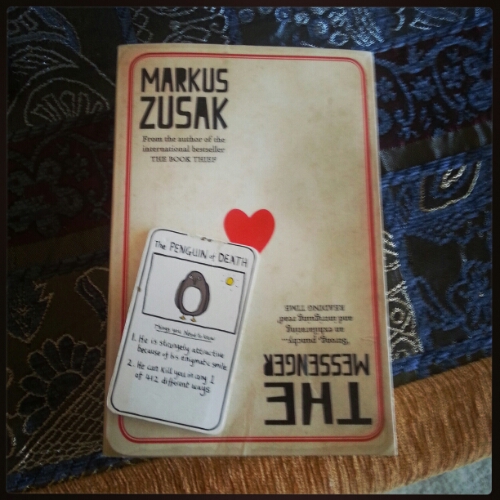 I should be doing my assignment. I should be hunched over my laptop typing away at this massive 50% assignment that was due yesterday, but I just can’t. The plan was going to be assignment, then work, then assignment, then sleep. But I figured that’d go crazy and be no good to anyone. So, I thought I’d write up The Messenger. This way I can actually read something else when I’m trying to sleep tonight. Besides, it’s all a matter of how many marks I’m prepared to lose. I’ve given myself ’til Thursday. That gives me -8%. I can live with that.

By this point, everyone’s heard of Markus Zusak, the Aussie author that brought us The Book Thief. The movie was great, as far as books-to-movies go, but the book is so much better. I know we book nerds always say that, but if you aren’t reading The Book Thief because you saw the movie, then you are really missing out. There are some aspects of Zusak’s genius that simply don’t translate to the silver screen.
Anyway, soon after I read The Book Thief, I started seeing The Messenger everywhere. The amount of times I almost bought it, only to put it down and walk out of the shop is actually embarrassing. But then, for my birthday, I was given a book voucher (of course), so I finally just bought the damn thing.

The thing about authors with sensational standalone books is that a lot of the time the others pale in comparison to that one phenomenal tome. This didn’t happen with The Messenger. These two books are simply very different stories, told in two very different ways, but both of them are still amazing. Zusak just has this way with words. He can choose the weirdest, most obscure verb and have it make sense. More than sense, those verbs make scenes just so much more vivid. It’s a talent I want to have one day. Some authors try to emulate Zusak’s style but they just fail. You know the authors I’m talking about. The authors who choose those words that make you just scratch your head in confusion. These guys should perfect their own style before trying to take on the masters.

My voice trips forward, landing on the ground at their feet.

You know those moments where you say something and it just kind of falls flat? How has no one ever written it like that before? Zusak is a genius.

I don’t usually add the blurbs into my posts, but I can’t summarise this story properly. The story’s kind of complicated. So here goes:

Meet Ed Kennedy – cab driving prodigy, pathetic card player and useless at sex. He lives in the suburbs, shares coffee with his dog, the Doorman, and he’s in nervous-love with Audrey. His life is one of peaceful routine and incompetence – until he inadvertently stops a bank robbery.

That’s when the first Ace turns up.

That’s when Ed becomes the messenger.

Chosen to care, he makes his way through town, helping and hurting (where necessary) until only one question remains. Who’s behind Ed’s mission?

It sounds a little like an action movie, but it’s not. This book actually reminds me a lot of GISHWHES, or The Greatest International Scavenger Hunt the World Has Ever Seen, the brain child of Misha Collins. For those of you unfamiliar with the concept, I implore you to visit the official website or check out the blog series written by the wonderful ladies over at The Collective as they completed GISHWHES 2014. I think I really want to do it next year, because it is a full week of compassion, caring, and simple kindness. This is what Ed Kennedy is told to do with those aces: to be kind. To notice the world around him and to be kind to the people he encounters there. It’s a beautiful message, and one that we could all do with remembering from time to time. This book is basically a 386 page long feel good movie.

This book isn’t quite as postmodern as The Book Thief. The story unfolds in a traditional, chronological manner. BUT when we get to the final card, and what Ed learns during that particular search for meaning, we get a little bit topsy-turvy. The story deviates from its straight line and goes curly and wavy and a little broken. This is a good thing because the ending of this book could have been really predictable, but Zusak changed the way he wrote the ending, the way he attacked it, and made it so we had no chance in hell of seeing it coming.

Plus, there’s a few instances where Zusak has Ed speak directly to the reader. Not too many times, just a few times to make us aware that we are reading a story. It’s a weird thing of which to be made aware (is that right?), while reading. But if you think about it, we aren’t usually aware of the fact we’re reading. We get swept up in stories and forget. So when authors remind us, it’s jarring. In a good way. But check this out:

I ask you:
What would you do if you were me? Tell me. Please tell me! But you’re far from this. Yours fingers turn the strangeness of these pages that somehow connect my life to yours. Your eyes are safe. The story is just a few hundred pages of your mind. For me, it’s here. It’s now.

Bam! How awesome is that? The story just meanders on after this. Ed doesn’t really talk to us again until a bit later, but this bit blew my mind. It’s just brilliant.

One of the best things about this novel, besides everything, is The Doorman. Who’s The Doorman? Ed’s dog. Seriously. Not only does he have an awesome name, but Zusak has Ed and The Doorman have actual conversations. Well, no, not actual conversations, but Ed imagines The Doorman’s responses and responds to those responses. It’s ingenious. Everyone has had imaginary conversations with their dogs before, but this is the first time I’ve ever read of such an occurrence. It’s just plain awesome. And it makes all of us do glovers feel a little less crazy because, finally, there’s a protagonist who talks to his dog too.

Finally, at present there’s a 40% sale on all YA novels on Bookworld, which is like an Aussie Book Depository with all proceeds going directly to Penguin (as far as I can tell). So, please, after reading this, type the first YA book you think of into the comments. I want to go on a book buying spree, dangnabit!

Bec Graham, 24, was born on the wrong continent. Everything from her burns-like-paper skin tone to her inability to cope with the slightest hint of a hot day suggests she should have been born under the gloomy skies and mild sun of the UK. She hopes writing will get her to her rightful home one day. Failing that, she scans the skies for a spinning blue police box, hoping to catch a lift back to the motherland.
View all posts by Bec Graham →
This entry was posted in Extorting Bibliophilia and tagged Audrey, Australian, Bloggers, Bookworld, Ed Kennedy, GISHWHES, Markus Zusak, Misha Collins, postmodern, random acts, The Book Thief, The Collective, The Messenger, YA. Bookmark the permalink.

1 Response to #24 “The Messenger” by Markus Zusak