#16 “The Hound of the Baskervilles” by Sir Arthur Conan Doyle 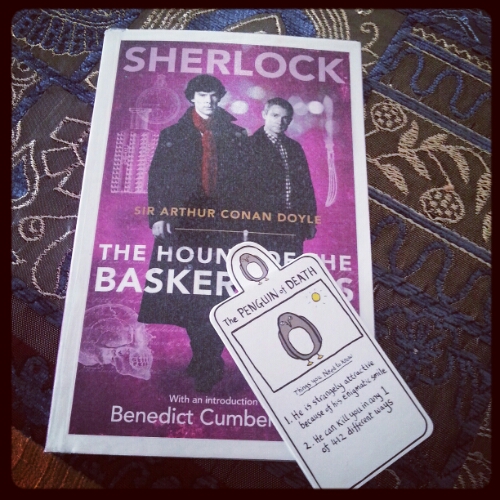 So because uni work x sickness = no time for blogging, I’m actually falling a little behind. There may be a bit of a blogging barrage coming your way this week, just so I can get on top of things. My other posts are more pressing (and you’ll understand when I put them up, but no clues: spoilers, sweetie!) but I can’t pick up another book until I write up this one. All work and no reading makes Bec a dull girl, so let’s get this done.

As you may already know if you follow me regularly, I made the unwise decision to opt for the rarer-than-hen’s-teeth BBC reissues of the Sherlock Holmes stories. Seriously. I saw all of them, all at once, at my old local Dymocks but I was flat broke at the time so I walked on by. Since then, I have never seen all of them. Actually, I have never seen more than one in a book store. So, because of this, whenever I see one of them I must buy it. No matter what.

This particular instalment was one of the main reasons I opted for the BBC versions over a compendium. I don’t know if you can make out that name down the bottom of the front cover, but the intro for this book was written by Sherlock himself, Mr Benedict Cumberbatch. Now, what self-respecting Sherlockian could walk past that? (For the record, The Sign of Four‘s foreword [see what I did there?] is written by Mr. Martin Freeman.  Hopefully, that’ll be my next Sherlockian purchase.)

Mr. Cumberbatch’s intro makes the $20 totally worth it, if only for this line:

Was that alright? Can I do it again? What do you mean it’s not like filming…?

Anyway, I spent the majority of the book thinking that this was the story where we lost Sherlock Holmes. But no, that was the short story The Final Problem. Instead, Hound of the Baskervilles was released after that story, but set before it. Like Conan Doyle could really kill off Holmes. He wa

s way too beloved by the public. But I digress.

What I found most interesting about this story was the interweaving of two mysteries into one. We have the mysterious murder of Sir Charles Baskerville and an escaped murderer in the same neighbourhood in which Sir Charles was killed.

“Oh, well, the murderer did it!” I can hear you thinking.

Well, no. That would be way too easy and not in keeping with Doyle’s genius. Plus, you’re forgetting that there is a hound at the core of this particular riddle. So instead, this murderer becomes a lovely red herring for both the motive and the killer. Bravo, Sir Doyle, bravo.

The structure of this book reminded me a lot of the RDJ portrayal of the detective. Do you remember the first movie? Where all throughout the film Holmes would pick up or pay attention to seemingly obscure things but at the end he would explain it all to us via a montage? This is exactly how it happens in Baskervilles. Oh, the subtlety. Plus, I thought I’d picked the murderer from the get go. But I was pleasantly mistaken. It could be that I’m a crime mystery neophyte. Or it could be that Doyle is simply a master of his craft.

Cumberbatch touched on an important point in his introduction:

Is this a ploy by Martin Freeman – who is determined that the series will be renamed “John” before long? After all, this is the most popular and horrific of all the original stories and yet Holmes is notoriously absent for six out of its fifteen chapters. Why?
Because it’s obviously a dog! Sorry, I suppose that was a spoiler…
But Sherlock would get it too quickly by snooping about for the biggest dog in the neighbourhood and we’d be back at 221B in time to crack the tantalus and slip another cigar from the coal scuttle.

This was something I noticed as well, that Sherlock was absent for pretty much half of the book. And Cumberbatch is right. Holmes would have solved the case far too quickly. So instead, John (sorry, Watson. He’s known as Watson in the books) goes alone and we get a far more in-depth look at Baskerville Hall, where Sir Charles was murdered, and all of the residents in the surrounding area. Because John doesn’t have the deductive mind of Sherlock and actually has to look for clues, rather than figuring them out through someone’s shirt sleeve or jacket hem. Plus, as Cumberbatch says, this story is horrific. Maybe not for a modern audience with all of our Saw and The Hills Have Eyes and Paranormal Activity and The Ring but it was fairly horrific for its time. I was struck every now and again how much action and gun slinging and violence was included in this story during a time where society was figuratively, and literally, straight-laced. I suppose that was the point, though. Not only was Holmes simply brilliant but the danger in these stories gave London society a way to escape the trappings of their “proper” behaviour.

Baskervilles was incredibly atmospheric as well. The descriptions of the moors around Baskerville Hall and the sounds of the hound and the creepiness of the nighttime all gave the story that beautiful spooky quality that can be lacking from some mystery stories. Doyle plays the balance between plot and description like an expert conductor.

You’ll have noticed that I haven’t really touched on plot or characters. This is because:
a. the story is so well-known that you may already know it, and
b. spoilers.
You should all discover this story for yourself. It took me a while to read, because the language takes some getting used to, but it was totally worth it. I will always recommend these stories.

Now, no discussion of a Holmes story would be complete without comparing the book to the show. But because I’ve already prattled on for over 1000 words, I’ll summarise all of the comparisons into a list:

It’s always fun to see the comparisons, don’t you think?

In keeping with my usual MO, I will not rate this book. The classics are not for me to grade. They have lived longer than me and I’m sure they will survive way past my lifespan. All I will do is give this book my recommendation.

Bec Graham, 24, was born on the wrong continent. Everything from her burns-like-paper skin tone to her inability to cope with the slightest hint of a hot day suggests she should have been born under the gloomy skies and mild sun of the UK. She hopes writing will get her to her rightful home one day. Failing that, she scans the skies for a spinning blue police box, hoping to catch a lift back to the motherland.
View all posts by Bec Graham →
This entry was posted in Extorting Bibliophilia, My Fangirl Life and tagged Baskerville Hall, BBC, Benedict Cumberbatch, classic, crime, Hound of the Baskervilles, John Watson, Mark Gatiss, Martin Freeman, mystery, Sherlock, Sherlock Holmes, Sir Arthur Conan Doyle, Steven Moffat. Bookmark the permalink.