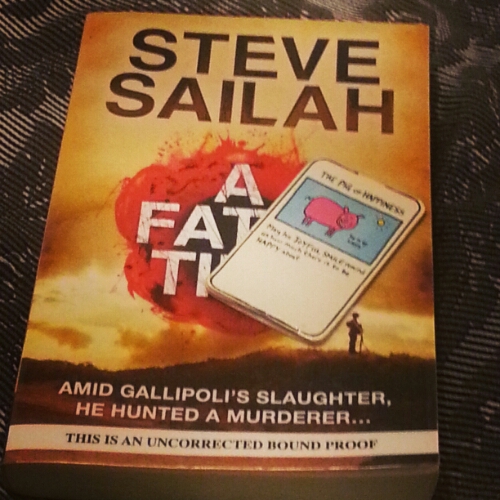 You guys know how much I hated the Delirium trilogy, right? The first book promised me the world and then just decided not to deliver. But, even though I left that series loathing everything about Lauren Oliver, I still finished it.

I did not finish A Fatal Tide.

I simply couldn’t do it. Every time I opened the book, I knew I was leaving myself open to more disappointment. And so I simply stopped. I have too many other books to read to warrant continuing with a book that constantly lets me down.

Things started to unravel from the opening scene. We are thrust into the heat of battle on the shores of Gallipoli. We see our protagonist, Thomas Clare, and his brothers-in-arms struggle for survival during a particularly awful skirmish. And…that’s it. There is no point to this opening scene. We don’t learn anything. And this is dangerous because we are introduced to so many characters so quickly that not learning anything means that we can’t keep the characters straight in our heads. The prologue was entirely unnecessary. It should have been cut. Now, A Fatal Tide is the first “uncorrected bound proof” I have ever read so I’m not entirely sure what state the book is in by this stage. But my guess is that the “proof” is the final step before publication. So, there is no chance that any of the problems I had with the story would’ve been fixed by publication. Which means that the prologue was probably in the official copy. Lame.

Before I go on, here’s the blurb:

A powerful novel set in Gallipoli, that’s part war-story and part mystery. ‘Amid Gallipoli’s slaughter he hunted a murderer . . .’
It is 1915 and Thomas Clare rues the day he and his best friend Snow went to war to solve the murder of his father.

The only clues – a hidden wartime document and the imprint of an army boot on the victim’s face – have led the pair from the safety of Queensland to the blood-soaked hills of Gallipoli.

Now not only are Thomas’s enemies on every side – from the Turkish troops bearing down on the Anzac lines, to the cold-blooded killer in his own trench – but as far away as London and Berlin.

For, unbeknown to Thomas, the path to murder began thirteen years earlier in Africa with the execution of Breaker Morant – and a secret that could change the course of history . . .

Thomas is looking for his father’s killer while dodging bullets. Sounds incredibly thrilling, right? Wrong! Sailah handled this concept so badly that I want to throttle him for it. I was so excited for this story and I’ve been left cold.

We learn the details of Jack’s, Thomas’ father, death as Thomas does. I expected nothing less. We follow him around learning details from the coroner, the police, and Jack’s mate who happened to be a tracker. So when Thomas meets and befriends his fellow soldiers we already know all of the grizzly details. But his friends don’t. Now, instead of summarising the explanation of the murder in a few sentences, Sailah has Thomas and his best friend from back home, Snow, explain every single detail again. I mean, they do it in the manner of Sherlock Holmes and Watson, but this is a gimmick designed to disguise the information we’re being given. Sailah should have chosen one explanation (organic or gimmicky) and kicked the second because this is just overkill. Fancy overkill, but overkill.

Speaking of Sherlock Holmes, this was a theme that was not explored at all. Thomas and Snow loved the Conan Doyle stories as they grew up. They often adopted the characters’ voices as they spoke to each other. But this theme wasn’t utilised properly. Sherlock and Watson were mentioned every fifty pages or so, but that was it. Sailah could have had Thomas adopt Sherlock’s way of investigation, or even had comparisons come to mind as Thomas discovered different clues, but there was none of that. Thomas just ambles along and the clues find him.

As a detective, Thomas is a moron. There was an incredibly important document attached to Jack’s death, and it seems to be the reason he was killed. The document was official, but scribbled on the side were some handwritten notes:

And how do we find out what these words mean? Not through any genius on Thomas’ part but through some very contrived, very lucky episodes. The episode that really annoyed me was finding out what TNP meant. Apparently it means “take no prisoners”. This isn’t explained to us by an army official or some kind of Army Abbreviations to English dictionary. No, we get told what TNP means because Thomas hears one of his fellow soldiers say “take no prisoners” and Thomas assumes that that is what TNP means. No fact checking, no second opinions, just “Oh this phrase starts with the same letters that are on that document, so it must be right”. Sherlock Holmes would DEFINITELY not have done that.

The sleuthing Thomas does do is ridiculous. During the battle of Gallipoli, there definitely would have been some down time because everyone has to sleep, but during that downtime other issues must have had to have been addressed. Writing letters to the families of the perished soldiers, organising supplies, coordinating the ANZACs effort on Gallipoli with the rest of the Allies’ war effort. Thomas’ commanding officers would have had so much to do that having a lowly ranking soldier like Thomas approach them with some weird questions would have resulted in Thomas being fobbed off. Especially when Thomas was being insubordinate and asking highly personal questions of said commanding officers. I found the information that Thomas gleaned from his officers very unbelievable because I’m pretty sure when low-ranking soldiers question their commanders integrity or motives they get disciplined. They don’t get answers. It was lazy, lazy crime solving. Thomas should have had to find those details on his own, not drill his superiors for them. And if Sailah did stick with Thomas asking questions of higher authorities, they should have been dead-end discussions, not discussions full of answers. This really pissed me off.

I had a major problem with Teach’s character. Teach was a nickname given to him by Thomas because, in peacetime, Teach was Thomas’ teacher. Obviously. That was fine and actually kind of cool. What annoyed me was that Teach’s dialogue was 95% quotes from literature. Seriously, most everything Teach said had already been said by someone else. That got old real fast, let me tell you. I love my characters to have quirks, but when they’re overdone? There is nothing worse.

Plus the whole looking for a killer in the middle of Gallipoli was shoddily done. I went pages and pages without any mention of Thomas’ father, which was fine because Thomas wouldn’t be thinking about him all the time in a war zone. But, when Jack did come up it felt like Sailah had simply forgotten to mention Jack for a while and decided to shove him back in. The two parts of the story never seemed to coalesce. We were either learning about Thomas’ dad or in the middle of a fight for the characters’ lives. They would have to be separate, sure, but not so separate. Stories have to have a natural flow and this one just didn’t.

There were some positives in this book but if I mention them, I feel like someone might accidentally pick this book up and decide to give it a go. And I’m trying to save you from the sheer frustration I suffered at the hands of A Fatal Tide.

I gave Requiem, the dismal ending of the Delirium trilogy one star. It was awful, but I did manage to finish it. So, seeing as I could not finish A Fatal Tide, I give this book:

Bec Graham, 24, was born on the wrong continent. Everything from her burns-like-paper skin tone to her inability to cope with the slightest hint of a hot day suggests she should have been born under the gloomy skies and mild sun of the UK. She hopes writing will get her to her rightful home one day. Failing that, she scans the skies for a spinning blue police box, hoping to catch a lift back to the motherland.
View all posts by Bec Graham →
This entry was posted in Extorting Bibliophilia and tagged A Fatal Tide, Australian, Gallipoli, murder, negative review, Steve Sailah, Thomas Clare. Bookmark the permalink.