#4 “Eleanor and Park” by Rainbow Rowell 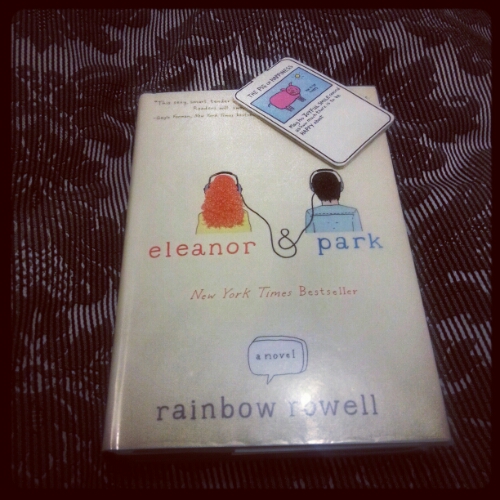 So, as it happens, my plan didn’t work. Note to self: when choosing a book to fill in time before a new release, choose one that isn’t so hard to put down! Eleanor & Park pretty much took me a day to read. I started late Sunday night and finished at a little past 11.30 last night. And once I’d closed the book, I hugged it to my chest for a few seconds, hoping that both Eleanor and Park could feel my hug through the cardboard.

Rainbow Rowell is a spectacular author. Splendid. Marvellous. Magical. I don’t read a lot of contemporary fiction. My thing is fantasy with a little bit of sci-fi or dystopia thrown in for good measure. But Rowell’s writing brings magic to the mundane. Not that Eleanor and Park’s story could in anyway be considered mundane.
Some people may try to reduce this glorious novel down to a “romance”. But that just wouldn’t be doing this story justice. When people hear “romance” they think of a wedding as the goal, some two-dimensional characters who are too sexed up to actually have lives of their own, and a sub-plot that no one remembers even as they’re reading it. The thing about Eleanor & Park is that the subplots are so intricate and grim and heart-wrenching that the main plot, the romance, acts as the sun breaking through the storm clouds of those subplots.  Without the romance, we may’s well be reading a modern version of Les Miserables.

The most amazing thing about this novel is how it progresses. Eleanor is the new girl at

Park’s school and they meet because Eleanor has to find somewhere to sit on the bus and the seat next to him is the only one available. They spend every morning and every afternoon sitting next to each other, not speaking. Then, one day, Park realises that Eleanor is reading his comics over his shoulder and the relationship blossoms from there.   Rowell really nailed the progression of high school relationships. You know when you have to sit next to that guy/girl in whichever class because of the arranged seating? Then one of you asks the other for help with a question and you go from there until all of a sudden you find yourself making out in alcoves at the top of stairs.

Not that that’s ever happened to me …

At the end of this book you forget that Park once felt sorry for Eleanor. That when she first got onto that bus, he thought that she was “big and awkward”. Because by the end, these two have the kind of love that very few people ever experience in their lives. And these guys got it right in their sixteenth year of existence.

Rowell is a master of combining the fluffy with the dark. In Fangirl it was the fact that Cather and Wren’s mother had skipped out on them on 9/11 and that their father was manic. In Eleanor & Park it is the fact that Eleanor lives with an abusive step-father. And before that, with an indifferent, selfish biological father. It takes a while for us to know the extent of Eleanor’s situation, which is how any storyteller worth their salt tells a story. We know that Eleanor is different, but we don’t know why. Actually, one of the brilliant things about this novel is that Eleanor’s clothes are never explicitly explained.

Today the girl was wearing a giant men’s shirt with seashells all over it. The collar must have been really big, like disco-big, because she’d cut it, and it was fraying. She had a man’s necktie wrapped around her ponytail like a big polyester ribbon. She looked ridiculous.

At first we think Eleanor may be wearing her clothes like armour: being different

because she can. But then we realise she dresses in those far out clothes because she has no other choice. Her step-father, Richie, is never going to pay for clothes for his step-children. Not when there’s booze to drink, kids to terrify, and a wife to beat. So Eleanor makes do. It is so terrible, Eleanor’s home life. So when Eleanor and Park start getting friendlier, we as readers cling to Park just like Eleanor does: he’s a lighthouse in the darkness to keep us safe.

Park has problems as well, only they aren’t quite as dramatic as Eleanor’s: his father is disappointed in him for not being more “macho”. No one’s life is trouble free. I think that may have been Rowell’s point. Even though Park’s problems kind of pale in comparison to Eleanor’s, he still has them and they still affect him.

There was a page in this book that I just didn’t want to stop re-reading. Page 44, when Eleanor and Park are in English class discussing Romeo and Juliet. Now, I hated R&J but everyone else seems to hold that play up as Shakespeare’s finest. The perfect love story. Bleh. So, here is page 44 of Eleanor & Park. I’ll abridge it as much as I can, but every word is pretty amazing so I’m not sure how many words I’ll be able to cut.

Today they were supposed to be discussing Romeo and Juliet, but nobody wanted to talk.
“You don’t seem troubled by their deaths, Miss Douglas … It doesn’t strike you as sad? … ‘Two young lovers lay dead. Never was a story of more woe’. Doesn’t that get to you?”
“I just don’t think it’s a tragedy … he’s so obviously making fun of them.”
“Who is?”
“Shakespeare.”
“Do tell …”
She rolled her eyes again … “Romeo and Juliet are just two rich kids who’ve always gotten every little thing they want. And now, they think they want each other.”
“They’re in love …” Mr. Stessman said, clutching his heart.
“They don’t even know each other,” she said.
“It was love at first sight.”
“It was ‘Oh my God, he’s so cute’ at first sight. If Shakespeare wanted you to believe they were in love, he wouldn’t tell you in almost the very first scene that Romeo was hung up on Rosaline … It’s Shakespeare making fun of love.”

Boom. Nailed it, Eleanor. This should be stapled into the cover of every high school’s copy of R&J. Shakespeare was considered hilarious and kind of crude back in the day. So why
wouldn’t he write a parody play about love? I love this interpretation because it puts my hatred of that play into words that I just couldn’t find.

Throughout the story, Eleanor finds these disgusting notes written on her school books. She scribbles them out, throws out covers, and tries to change the words to flowers, but they keep appearing. And she’s so sure that it’s her primary bully, Tina, that she doesn’t try and look in any other direction. That is, until Richie finds out about Park. Because Eleanor tries to keep Park separate from her home life for most of the book:

Until this moment, she’d kept Park in a place in her head that she thought Richie couldn’t get to. Completely separate from this house and everything that happened here. (It was a pretty awesome place. Like the only part of her head fit for praying).
But now Richie was in there, just pissing all over everything.

When Richie finds out about Park, he trashes Eleanor’s room, ruins all the gifts from Park (comics and tapes) and writes a note on the lid of Eleanor’s box in which she keeps her treasured stationery. And it’s then that Eleanor realises that Richie had been writing the horrible, disgusting notes in her school books. Notes that read “suck me off” and “pop that cherry” and, “do i make you wet?”.

How he looks at me.
Like he’s biding his time.
Not like he wants me. Like he’ll get around to me. When there’s nothing and no one else left to destroy.
How he waits up for me.
Keeps track of me.
How he’s always there. When I’m eating. When I’m reading. When I’m brushing my hair.
You don’t see.
Because I pretend not to.

I felt physically sick. What a disgusting, disgusting man. And the thing is, men like this actually exist in the world. That is the most horrible thing. So once this all happens, Eleanor finally tells Park everything. Keeping in mind, this is at the very end of the book. [SPOILER] And so Park drives Eleanor to her uncle’s house where she’ll be safe. Safe from Richie because Eleanor is convinced that Richie will kill her if he ever finds her again. So Eleanor and Park “just stop”.

However, the last few pages are a blur of the year when Eleanor is away. We learn that neither one got over the other, and it’s kind of cathartic. And we see that Eleanor has at least one friend and has her own clothes AND that her uncle and aunt talk about pulling all of the other kids out when they think Eleanor isn’t listening. 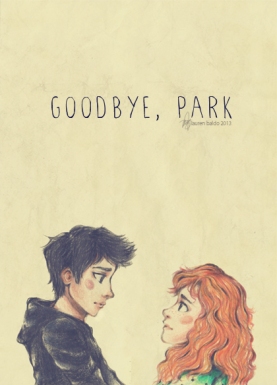 NB: I have put the links to the original artists of all of these artworks in the pictures themselves. Click on them if you want to see more!

Bec Graham, 24, was born on the wrong continent. Everything from her burns-like-paper skin tone to her inability to cope with the slightest hint of a hot day suggests she should have been born under the gloomy skies and mild sun of the UK. She hopes writing will get her to her rightful home one day. Failing that, she scans the skies for a spinning blue police box, hoping to catch a lift back to the motherland.
View all posts by Bec Graham →
This entry was posted in Extorting Bibliophilia, My Fangirl Life and tagged abuse, brilliant writing, bullying, Eleanor, Eleanor & Park, family, first love, interpretation, Park, Rainbow Rowell, romance, Romeo and Juliet, Shakespeare, YA. Bookmark the permalink.

5 Responses to #4 “Eleanor and Park” by Rainbow Rowell