“The Stone Rose” by Jacqueline Rayner 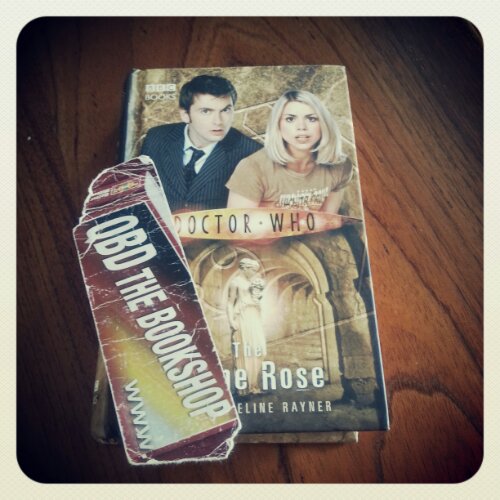 In order to keep myself entertained during this damn pink-and-red holiday, I spent the day on board one of my all-time favourite ships: the S.S. TenxRose, with Captain Jacqueline Rayner at the helm.

Could they be any cuter?

I’ve read a few Doctor Who novels at this point in my Whovian career, and The Stone Rose is the first one I’ve read that was written by a woman. Which makes absolutely no sense since I’m pretty sure all the fan fiction I’ve ever read about Doctor Who was written by women.

Anyway, what I noticed most about Rayner’s story-telling is that there was a bit more of a focus on the relationship between Rose and Ten, Rose and Mickey, Jackie and Ten, and Jackie and Rose. In my time as a Doctor Who reader, I’ve read some brilliant plots and seen my beloved characters recreated in just the right way, flaws and all. But what’s been missing is the relationships that make the show what it is. They’re touched on, sure, but no one captures them like Rayner does. Just have a look at this:

Almost 1,900 years later, a grainy picture of that same statue was sellotaped to a cupboard in Jackie Tyler’s kitchen. It was a shame they didn’t do a proper postcard of it, but Mickey had taken a photo on his phone and had blown it up for her, and that was better than nothing. Her daughter. Her beautiful daughter, Rose. Jackie started singing to herself as she opened the cupboard to get out a microwave meal for one.

To me, that is perfect. It’s poignant without being overly depressing. Jackie, thinking about her daughter everyday, with Mickey as moral support, as she gets on with her life the best way she knows how. That image of Jackie with her single microwave meal just hits me right in the heart. She’s lost her husband and her daughter’s off gallivanting around through time and space with a strange 900-year-old alien. Jackie is so much stronger than we give her credit for.

I love the dynamic of TenxRose. You have a Time Lord who’s seen it all paired with a nineteen-year-old shop girl who is just happens to be extraordinary. She gives the Doctor laughter again. She shows him a better way of being and for that, he loves her. We know the Doctor doesn’t usually fall in love with humans. But Rose is special. Rose will always be special. Which is why the rumours I’ve heard about Clara being the next Rose really piss me off. I mean, for one thing, can you imagine Rose doing this:

No, didn’t think so. Rose is more like this:

Mickey: Just leave him! There’s nothing you can do!
Rose: Got no A levels. No job. No future. But I’ll tell you what I have got, Jericho Street Junior School Under 7’s gymnastics team. I got the bronze.

And then she proceeds to save the Doctor by swinging in on a very precarious looking rope/cable. That’s what makes Rose spectacular.

OK, so about The Stone Rose. It starts with Ten and Rose meeting Mickey at a museum, where he shows the pair of them a statue of the Roman goddess Fortuna. Who looks exactly like Rose. So Ten and Rose hop into the TARDIS and head back to Ancient Rome to make sure that that statue gets built. Only, when they get there, there seems to be a whole lot of wibbly-wobbly-timey-wimey stuff going on. And it all seems to be linked to an artist with incredible skill and a slave girl with extraordinary psychic powers.

The way Rayner dealt with history in this book was interesting. Ancient Rome was brutal, we all know that. What with slaves and gladiators and the like. But Rayner shows us these details in such a way as to be true to the nature of Doctor Who as well as history. Clever, really. We see slaves. We see them ignored, treated like furniture, and dancing around in next-to-nothing for the entertainment of the upper classes, but we never ever see them get beaten, raped, or any of the truly, truly horrendous stuff. So, we get the sense of the injustice of slavery, but we never see any of the stuff that would jeopardise the overall tone of Doctor Who.
Then we get Ten and some other unfortunate men trapped in the gladiators’ arena with a bunch of emaciated wild animals. We get the tension and the bloodiness, but not to the extent where we cross into goriness. Because that’s not how Doctor Who operates. It really was quite brilliantly done. I don’t know if I could have toed the line as well as Rayner did. Kudos!

(Just one thing. Eleven always says that he can speak “everything”, including Horse and Baby. So as I was reading the scene where Ten scares off the animals by adjusting the frequency of his sonic, I was thinking “Just tell them to turn around! Tell them to leave you alone!”. Of course, this book came out years before Stormageddon and Susan, so that’s not really fair. Just one of those fangirl problems, I suppose.)

The best thing about The Stone Rose is that half the book is about The Doctor saving Rose and the other half in all about Rose trying to get back to The Doctor. The structure of this book works as a metaphor for the whole TenxRose relationship:

Because they need each other, The Doctor and Rose. Yeah, he might be a Time Lord who’s saved civilisations and bent time and ensured the safety of millions, but Rose keeps him in line. And she makes sure that he’s safe. She shows him how to be compassionate and how to love again. And, really, there’s nothing more important than love.

My favourite parts of this whole book are the little glimpses we get into the relationship between Ten and Rose. In the show, we see these things in looks, gestures, tones of voice. But in a book, it’s different. And Rayner totally nailed it:

Rose was taken aback. She hadn’t known – how could she know? – what her disappearance had done to him. The Doctor had a look of such despair in his eyes that her heart almost stopped in pity. She wanted more than anything else in the world to jump up, go to him, tell him that everything was going to be all right.
But, what with possibly ripping time and space apart, that was probably a bad idea.

I’m going to stop now, before I just start gushing about the glory that is the S.S. TenxRose. But The Stone Rose was definitely the perfect Valentine. Who knows? Maybe it’ll be my date for next year.

And, just because I know you’ve been waiting for it.

Bec Graham, 24, was born on the wrong continent. Everything from her burns-like-paper skin tone to her inability to cope with the slightest hint of a hot day suggests she should have been born under the gloomy skies and mild sun of the UK. She hopes writing will get her to her rightful home one day. Failing that, she scans the skies for a spinning blue police box, hoping to catch a lift back to the motherland.
View all posts by Bec Graham →
This entry was posted in Extorting Bibliophilia, My Fangirl Life and tagged Ancient Rome, Billie Piper, David Tennant, Doctor Who, Jackie Tyler, Jacqueline Rayner, Mickey Smith, OTP, Rose Tyler, ships, Tenth Doctor, TenxRose, the Doctor, The Stone Rose, Valentine's Day, Whoniverse. Bookmark the permalink.

9 Responses to “The Stone Rose” by Jacqueline Rayner