A conversation with William Herondale

For all of you bloggers out there who want to blog every day but end up sitting at your keyboard, tapping the desk/trackpad/your leg staring at a blank screen, I recommend you zip over to the Daily Prompts and get yourself some inspiration. It’s hard to think of something to write when you have absolutely no limitations. Anyway, I’m distracting myself. Even though this daily prompt is a few days old, I haven’t really had a chance to use it, in between studying, assessment, working, and not getting enough sleep. And I wanted to do this prompt justice. Because the idea behind this one is to talk about which character you would most like to have a conversation with and what you would talk about. And the character I would most like to sit down and talk to is one Mr William Herondale. And I can’t very well do him justice if I’m distracted by Statistics or sandwiches, now, can I?

William Herondale, to me, is the best example of characterisation I can think of. He is a beautiful young man, as all male leads in Young Adult fiction tend to be. But this beauty is at odds with the broken spirit that it hides. As a child, Mr Herondale accidentally released a demon from his father’s Pyxis. Once freed, the demon then turned on the young Herondale and cursed him. All who loved Will Herondale would die.

So for the better part (well, I suppose it would actually be the worst  part) of Will’s adolescence, he had to try and make himself as unlovable as possible. He fled from his family home into the arms of the London Institute, where he trained to become a Shadowhunter, the one thing his family never wanted him to be. And from that moment on, he had to ensure that no one in their right minds could love him. Except for Jem Carstairs – more saint than teenage boy – the young silver-haired boy who joined the London Institute with Death hovering not too far behind him. Because Jem was already marked for death, Will allowed himself one friend. One person whom he could love, who would love him in return.

Imagine that: knowing that if anyone cared for you too much, that that love would kill them.

This is why I think Will Herondale is the most delightfully complex character I have ever read. A beautiful, broken boy who takes it upon himself to be completely unlovable so that no one will die by his hand. Jem may be a saint, but Will has to be the most selfless mortal that I have ever read. And I love him for it.

If you want to read more of Will Herondale’s tormented life, you need to leave your house and make your way to your nearest bookshop. Next, make your way to the YA section and pick up these three books: 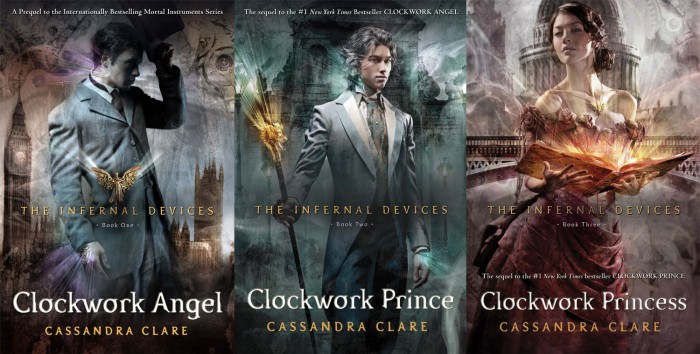 If not for Will Herondale, then at least for the covers. I am still to see book covers more beautiful than these. But seriously, you will not be disappointed.

Now that Master Herondale has been properly introduced, I can now talk about what conversation I would like to have with him. I would not talk about Tessa. I would enquire after her health, ask how [SPOILER] their marriage was going, and then move on. True love is hard to be around. Neither would I talk about Jem. I think that would be much too painful a topic for him. No, what I would talk to Will about is books. I would love to bring him into the 21st century to get his opinion on the books released after his death. Specifically books about magic and vampires. Could you imagine talking to Will Herondale about Twilight? I would love to get a bonafide Herondale quip about the “vampires” in that book. And I’d love his take on Harry Potter. Warlocks in a school? And they’re mortal?!
I’d take him to a book shop and get his opinions on Sir Arthur Conan Doyle, Bram Stoker, Jane Austen, George Orwell, Truman Capote, the Brontë sisters. I’d show him Neil Gaiman, Brent Weeks, Suzanne Collins, Richelle Mead, Eoin Colfer. I’d be very careful not  to show him books by Cassandra Clare. Then I would take out my magic rectangle of plastic and pay for his books before sending him on his way back to Tessa.

And maybe I’d try and take him to a duck pond. Just to hear his delightful Welsh accent tell me, in his sternest voice, to “never trust a duck.”

Bec Graham, 24, was born on the wrong continent. Everything from her burns-like-paper skin tone to her inability to cope with the slightest hint of a hot day suggests she should have been born under the gloomy skies and mild sun of the UK. She hopes writing will get her to her rightful home one day. Failing that, she scans the skies for a spinning blue police box, hoping to catch a lift back to the motherland.
View all posts by Bec Graham →
This entry was posted in My Fangirl Life and tagged 19th century, Cassandra Clare, characters, Clockwork Angel, Clockwork Prince, Clockwork Princess, DPchallenge, England, history, Jem Carstairs, Literature, Shadowhunters, The Infernal Devices, will herondale. Bookmark the permalink.

8 Responses to A conversation with William Herondale