#8.5 “The Fall of the Hotel Dumort” by Cassandra Clare and Maureen Johnson 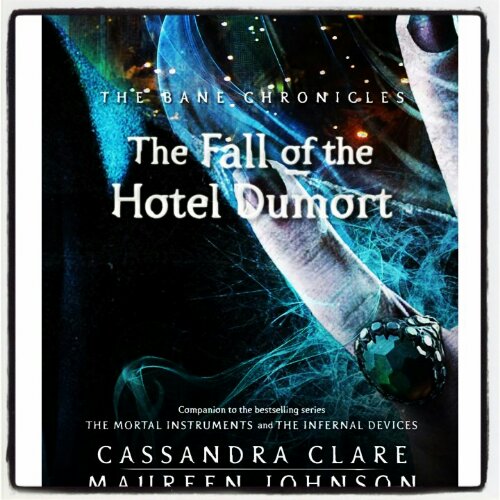 When I first started this blog, I linked a friend of mine without telling her it was mine. The next time I saw her, I asked what she thought of my blog and she looked confused. Turned out, she thought that this blog belonged to Cassandra Clare. A few months before this, I got the greatest compliment I have ever received during my writing career:

Your writing actually sounds a lot like Cassandra Clare…

If I could be half of the writer Clare is, I could die happy.

I didn’t realise it was Magnus time until I checked my phone late last night and an email from Amazon had cropped up in my inbox. I’ve been so caught up in assignment drama and home-life drama and work drama that a month has just flown by. (For anyone whose interested: apparently I can read five and a half books in a month. Just over a book a week. I think that’s pretty impressive). Anyway, when I saw the words The Bane Chronicles in my inbox, I was pretty damn excited. I have just started working on a story that’s been floating around in my head for months, and the main character was sitting around reading the Infernal Devices while waiting for her friend, so I needed a good quote.

Sidebar: why do characters only ever read “classics” in books? It’s infuriating.

So the quote I used was part of Will’s love letter to Tessa. Just dipping my toes into the depths of Clare’s universe awoke my Shadowhunter obsession. I almost gave up on my Fourteen-Step-Program to go back to Clockwork Angel, but a tattoo artist in the Valley still has it. Point is, having Magnus reappear was brilliant timing.

I love The Bane Chronicles for a multitude of reasons, but chief among them is the fact that these excerpts from Magnus’ life through the ages gives us  access to the lives of the secondary characters. “The Fall of the Hotel Dumort” focuses on Camille Belcourt. We see her at her lowest point: addicted to the blood of mundane cocaine addicts in the 1970’s. Truth time: I loved seeing Camille come undone. I absolutely hate her for what she did to Malec. I had only just started to forgive Alec for all but strangling Clary during her first visit to the Institute when all of a sudden he lets himself be manipulated by Camille and everything falls apart.

In every scene that Camille appears in, she seems so poised, so controlled. Her clothes, the inflection in her voice as she speaks, and her body language. Everything is carefully constructed so that she can glean the most personal gain from any given situation. I think that was why I found this story so satisfying. We get to see Camille in an almost human state. Repeated throughout the story is the disbelief that vampires can fall prey to something as mundane as addiction. And seeing Camille succumb in such a brutal and graphic manner just makes her seem more real. Or as real as a vampire who has lived for hundreds of years can seem.

Camille was moving toward him, unsteady. She wore a long black dress – rather, it was a dress that was now coloured black from the sheer quantity of blood on it…Magnus approached her slowly. As soon as he got close enough, she gave up the effort of standing and fell forward. He caught her halfway to the ground.

What was even more intriguing was the end of the story where [SPOILER] Magnus has his friend Catarina erase the visions of Camille soaked from fang to toe in the blood of an innocent addict from his mind. This simple act speaks volumes about the complexity of Magnus’ character. I like to think that Magnus didn’t want the events of the 70’s spoiling his version of Camille; that he wants her to remain the beautiful, sophisticated, intelligent woman of his past. Even though he knows they will never be a couple again.

I suppose that if you can live forever, your memories are all that remain in the end. So why not edit them to give yourself comfort during the endless years?

I give “The Fall of the Hotel Dumort”:

Can’t wait ’til next month!

Bec Graham, 24, was born on the wrong continent. Everything from her burns-like-paper skin tone to her inability to cope with the slightest hint of a hot day suggests she should have been born under the gloomy skies and mild sun of the UK. She hopes writing will get her to her rightful home one day. Failing that, she scans the skies for a spinning blue police box, hoping to catch a lift back to the motherland.
View all posts by Bec Graham →
This entry was posted in Extorting Bibliophilia, My Fangirl Life and tagged addiction, Cassandra Clare, characters, cocaine, Magnus Bane, Maureen Johnson, Shadowhunter, vampire, werewolves. Bookmark the permalink.